THE ALL FIRED UP TEAM 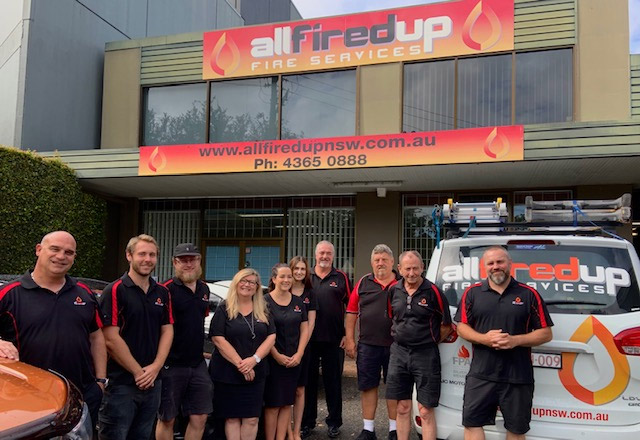 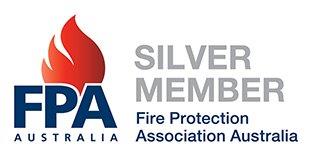 All Fired Up Fire Services Pty Ltd was established in 2011. The company is a dynamic amalgamation of two experienced operators, Craig Doyle and Andrew Mortlock.

Lifelong mates, Andrew and Craig work well together as they both hold very different roles with in the company. It is vital to both of them they maintain the company’s independence, and ensure All Fired Up remains wholly locally owned and operated. All Fired Up has no association with any national or multinational fire protection companies or manufacturers. The team works with suppliers to provide the best product at the best prices for our valued clients.

Our company’s goal is to add value to your business, providing honest, efficient and cost effective fire protection to clients large and small, whether it be commercial, industrial, residential, or the individual property owner. All Fired Up has your back!

Please, call the team to discuss your fire protection needs.

ALL FIRED UP TEAM MEMBERS 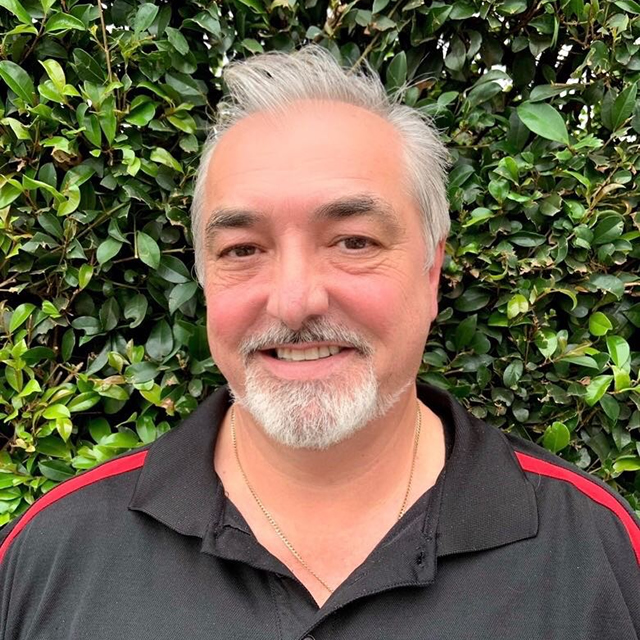 Craig DoyleManaging Director
Craig’s background is in management and business development, His experience has a broad scope, working with huge multinational companies , to small business, Craig is a management wiz.

Craig  has a natural flare for business development and an extensive appreciation of the critical value of customer service. Craig is an experienced manager holding management roles scoping responsibilities both here and overseas.

Craig holds a Degree in Economics, with majors in Economics and Geo-planning and a sub-major in Business. He has his finger on the financial pulse of the business at all times. With an extensive grounding in the building industry, Craig has combined his knowledge of management and auxiliary building services including fire protection to ensure All Fired Up’s clients’ needs are met in an efficient and cost effective way.

In addition to his business acumen, Craig has extensive experience in local government, serving as an elected Councillor on Gosford City Council for over 18 years, incorporating 9 years as Deputy Mayor, retiring  due to the amalgamation of Gosford and Wyong Councils in 2016. As a result of Craig’s service on local government ,including many posts to boards and sub committees he developed a unique understanding of the solutions required surrounding the provision, maintenance, and certification of Fire Services. 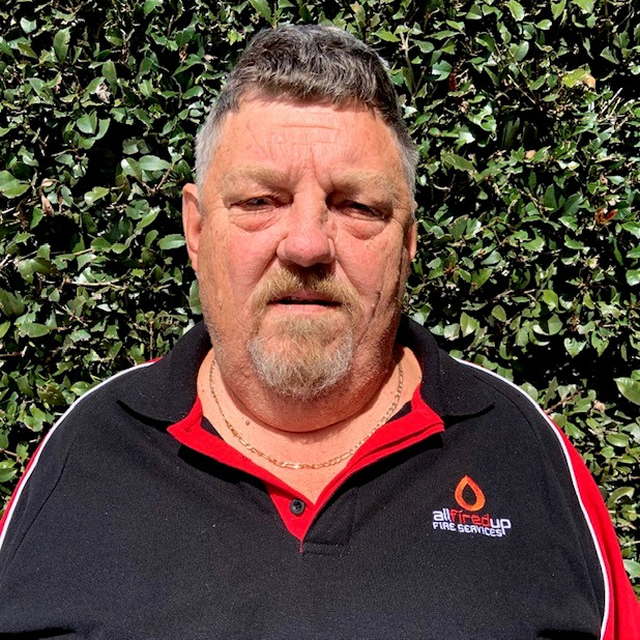 Andy has intensive experience working on all types of fire systems on both the installation and service/testing sides including fire sprinkler systems and pump sets, portable fire extinguishers, fire hydrant, hose reel and fire alarm and detection systems including gas systems.

Completing his advanced certificate in Fire Technology, Andy qualified as a Graduate Member of The Institute of Fire Engineers GIFireE.

In 2001 the company Andy was working with merged with Wormald and over this time he gained exposure to some very large fire systems including Sydney Opera House, Sydney University, University of NSW, Carlton and United Brewery (and no there wasn’t any sampling of the product), The Federal Law Courts of Australia and many other high-rise buildings and factories throughout the greater Sydney area. 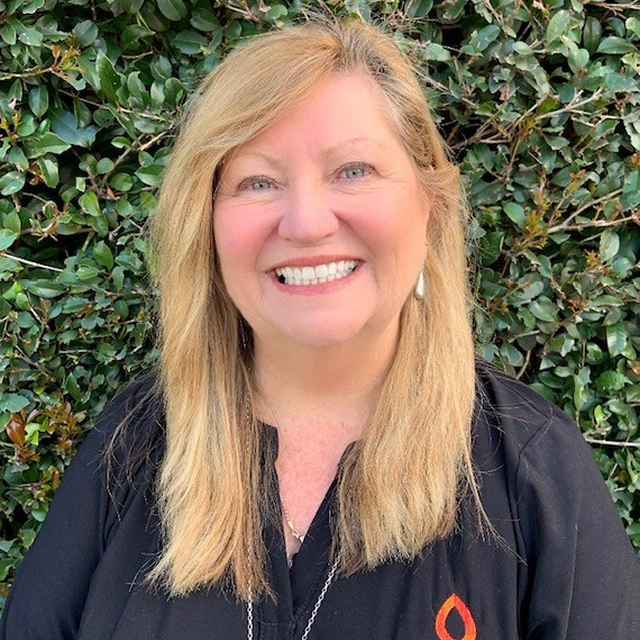 Donna BevittAdministration & Human Resources Manager
In April 2015 we secured the infamous Donna Bevitt -Financial Manager and HR extraordinaire. All Fired Up can’t even begin to express how thrilled…

…we are to have the one and only Queen Donna Bevitt join the family. Donna brings to the company 20 years of corporate management experience, incorporating Human resources management, Advanced Financial Management, and in addition WHS, RTW, Compliance skills and experience , that are unsurpassed.

Donna adds complete balance to the All Fired Up team with her caring, HR-y and professional manner. Donna has a special talent for handling pressure and managing difficult work place situations in a kind, yet on point way. All Fired Up hit the jack pot when ,after over19 years with her previous employer she became available and decided to become an all fired up gal ! 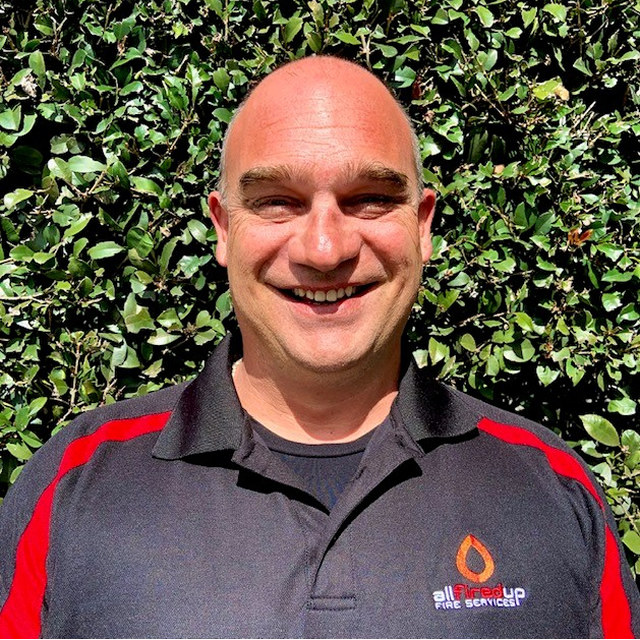 In the past, Craig has worked for many of the larger fire protection companies and is excited to be working for All Fired Up, a locally owned and operated, family-run company.

Craig’s primary experience is in passive fire protection. He has many years in the field and is extremely skilled in all aspects of fire protection and team management. Craig has FPAS accreditation and his experience includes managing large projects, including defects and new fit-outs, from residential through to large multi-level blue chip clients in the Sydney CBD.

Craig is a problem solver and loves a challenge, He is a “ can do “ man and is a genuinely friendly, nice guy. An avid Fisherman and Surfer Craig is a real family man, his family is his life.  Living locally for the past 4 years Craig,  his wife and kids now proudly call the Coast home. 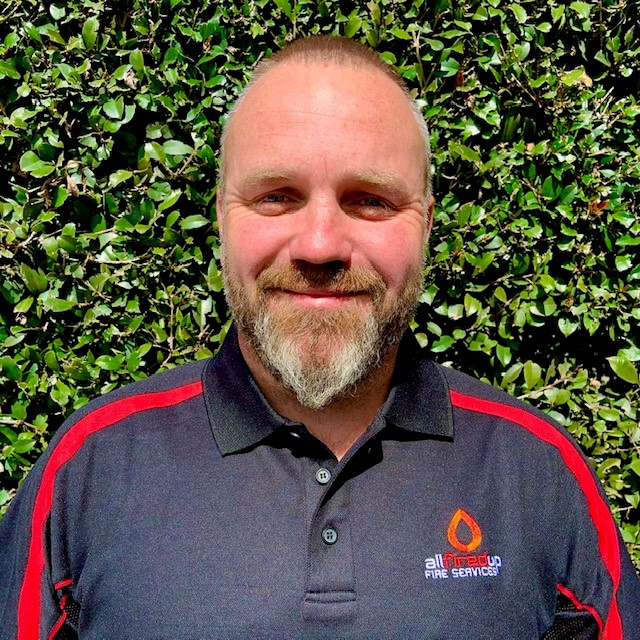 Brendan WallFire Technician- Plumber
Brendan is a fully qualified Plumber with sprinkler fitter and testing experience. With close to 10 years in the industry working primarily in commercial and high rise in the CBD of Sydney. Brendan brings a wealth of fire protection and maintenance plumbing skills to the role.

Brendan has an easy-going friendly nature, is professional and has a great attention to detail. Recently moving his young family to the Central Coast from Sydney, Brendan is keen to make the Coast home. A passionate, talented muso, Brendan plays many instruments, his favourite being the drums. Brendan will fit in well with the AFU team as he also doesn’t mind the odd round of golf. 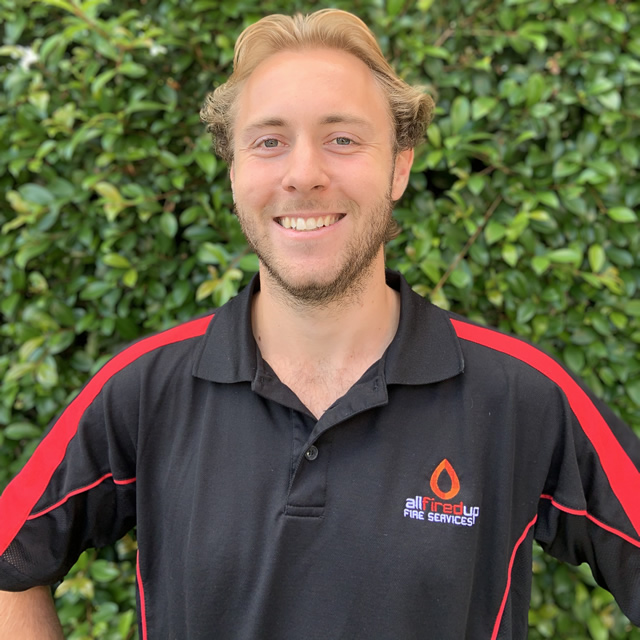 Tim StoneFire Technician- Electrical
A local guy, Tim was born in Gosford Hospital and grew up in the North Lakes area and loves living on the Coast.

Tim is a keen soccer fan, playing the game since he was a young boy and currently coaching a local under 18s team. Tim tried his hand at a few careers including accounting, before discovering his love of all things electrical. Tim has completed his electrical apprenticeship with All Fired Up and is now a fully qualified tradie. We are thrilled to have this snappy young sparky in the All Fired Up team. 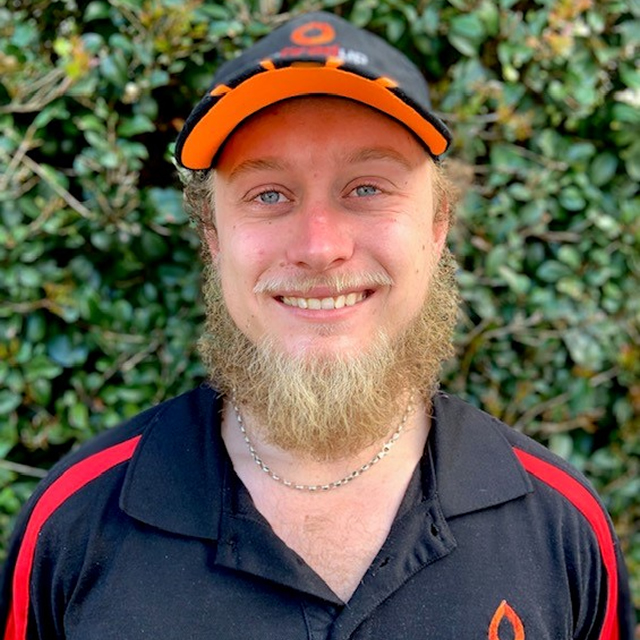 Rhys DavyFire Technician - Electrical
Our Team is expanding and it’s great to have Rhys on board. Rhys has lived on the Coast for over 15 years and completed his Electrical apprenticeship with Central Coast Council, formally Gosford City Council. Rhys has a true passion for industrial and commercial Electrical work.

His keen sense of attention to detail and his devotion to ensuring everything is done right is vital, particularly working in a lifesaving industry like Fire Protection. Rhys loves to travel spending 6 months travelling through Africa and Europe, he is a keen skater and loves to keep fit swimming. 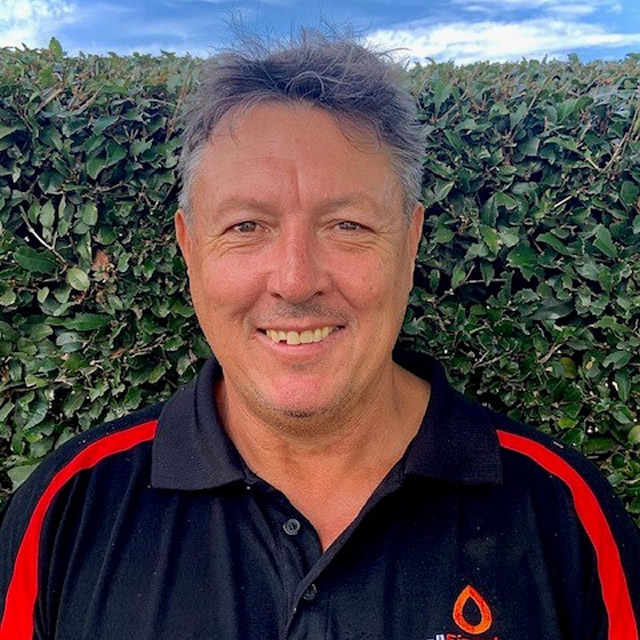 Craig HungerfordFire Safety Technician
Craig number 3 has extensive knowledge of the industry and has been in fire protection for over 10 years , previously working for a large national Fire company. Craig is thrilled with the opportunity to work with the award winning , locally based All Fired Up Fire Services , and particularly not to have to drive down the M1 every day.

Craig and his partner Kris of 29 years, and their 3 adult kids, have called the Central Coast home for the past 22 years . A massive South Sydney fan , Craig loves to stay fit, and has played Masters Rugby League for over 13 years with the Central Coast Bulldogs . 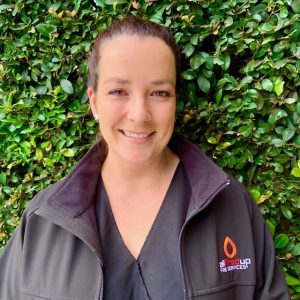 Sam grew up on the Central Coast and after spending time abroad in New Zealand, returned to the Central Coast to raise her young family. Sam is the proud mum and two boys with her third child due later this year. She joins the team with enthusiasm to assist in all areas of administration and finance and is a perfect fit for All Fired Up. 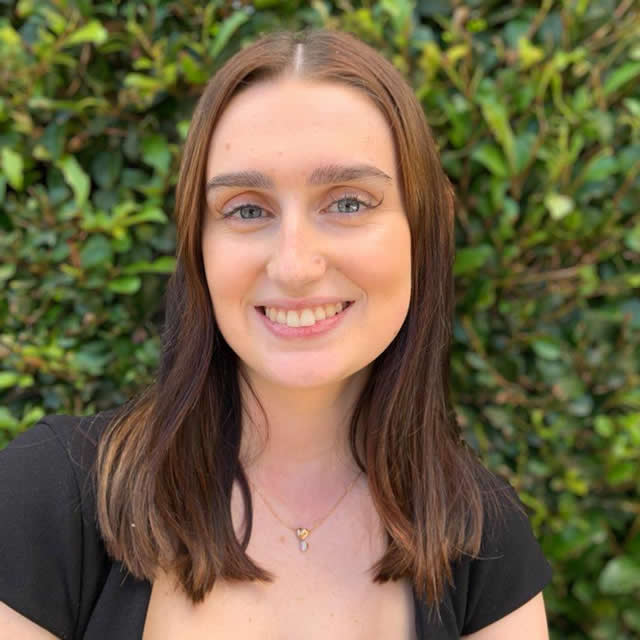 Lily WallAdministration/Certification Assistant
A bright young star has joined the All Fired Up team, Miss Lily Wall is a true local, born in Gosford Hospital and growing up in the Kincumber area. Lily attended Kincumber High and lives in Kincumber with her family. Lily has a background in administration working for a local Medical practice when she first left school,

and more recently in real estate strata management, with a focus on Commercial Fire protection. A fresh positive young woman, Lily loves the beach, music festivals, socialising with friends and travel. All fired Up were lucky to snap Lily up as she was one of the many young locals let go by her previous employer due to the Covid 19 pandemic. Get ready Miss Lily for a great career with All Fired Up.